skip to main | skip to sidebar

What If? Art 4: A History Book That Never Existed

Seeing how few postings I have made this month I do wonder if finally I am running out of steam. However, I guess I am not too angry about things at the moment. There seems to be some progress on moving house and the landlord and the bank have backed off for the moment. I did have some half-completed what if? book covers that I have sat down today and finished. These three can be grouped together as each of them envisages a different outcome for colonial empires. I will take them in historical order. 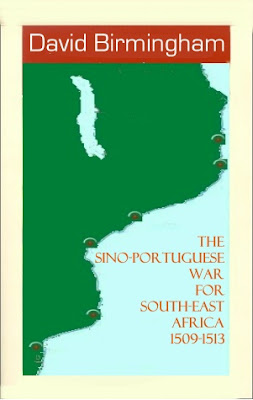 This one was stimulated by thoughts about what the possible continuation of Chinese explorations which began in 1421 as outlined in Gavin Menzies's book '1421 - The Year China Discovered the World' (2004) which outlines the huge fleets captained by eunuch admirals which went exploring around Asia and probably as far as Africa and maybe even America. However, a shift in imperial policy brought such explorations to an end in the early 16th century. In the late 15th century the Portuguese began sailing around the coast of Africa and on to India and China. They established 'factories', i.e. trading posts along the East coast of Africa - Zanzibar in 1503, Sofala in 1505 and Mozambique in 1507 and contined to develop these and others inland throughout the 16th century as well as expanding in China at Macao, in India at Goa and in Indonesia in Timor. This book envisages a battle between the Portuguese and Chinese over the area which was to become Mozambique where the Chinese had established bases 60-70 years earlier. Such a conflict would have shaken both Western and Chinese perceptions of the world. Assuming China had adopted an outward rather than inward looking then they might have mobilised their forces at a time when they were stronger than any western power. Such contact may have turned the Chinese view inwards and led to an abandonment of colonial expansion. As for the Portuguese given their apparent hunger for colonies on three continents, I doubt they would have been discouraged but the approach to China may have been more hostile and led to greater penetration of that country three hundred years before the Treaty Ports. I selected David Birmingham to write this book because he is a leading historian on Portugal and its relationship with Africa. 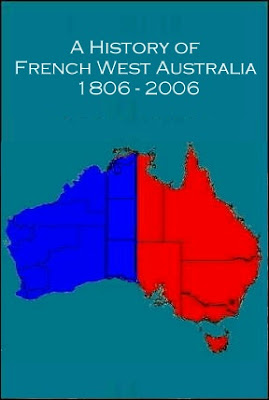 'This book was written around the time of the bicentenary celebrations in French West Australia. It was established formally in 1806 as part of Napoleon's plans to block the British Empire across the world which led him to become involved in Egypt, India, North America and the Caribbean. French interest in western Australia pre-dated the French Revolution. Having won sufficient mastery of the sea following the indecisive Battle of Trafalgar and with British ships kept to home waters to defend against the anticipated French invasion, Napoleon was able to put into force his plan, landing troops at what is now Cognac in South-West France Australe. With diversionary raids against British shipping around the South-East of Australia, French forces were able to secure a bridgehead and in 1806, Napoleon formally claimed up to the 133rd East parallel. This was as far West as the British had claimed in 1788. Following the defeat of Napoleon in 1815 the British permitted the new French regime as a boost to its prestige that they were keen to foster, to retain the colony which seemed to be of no great value being predominantly desert. Of course as with all borders between states, the economies of Adelaide in the South and Leclerc in the North were boosted by cross-border trade. French West Australia is noted for its wines, the first from outside Europe to rise to prominence in the mid-19th century.'

The French certainly had long had an interest in western Australia and it was really only British dominance of the seas which prevented Napoleon putting his colonial plans which also involved and invasion of India with aid from the Russians, into effect. A different outcome at the Battle of Trafalgar could have changed this, especially if it led to Nelson's death and yet no overwhelming victory. I picked Cognac as the name for what we call Perth, Australia as Perth, Scotland has it as a twin town. George Louis Leclerc was a French naturalist who I have substituted the name for Darwin. It took the British a long time to claim all of Australia, going from East to West; as late as 1825 they had only reached the 129th East parallel (the border of modern day Western Australia) and only set up Western Australia in 1829, partly to forestall French intervention in the region. Where there is a border between states you tend to get more economic development and with two colonising countries bringing people to the two halves of Australia I envisage its population would have been higher by now. 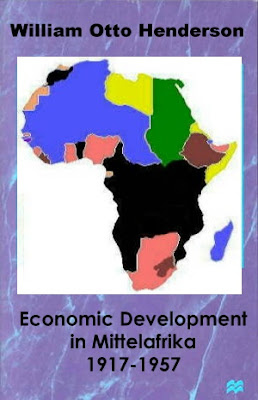 This book envisages that Germany won the First World War probably in 1915-16 and was able to put into place the grand plans that German nationalists were developing as the war progressed. They planned to have an economic bloc called Mitteleuropa in Europe and to restructure the central African colonies into Mittelafrika. They believed that unless Germany could achieve this it would lose out to the superpowers of the time, seen as the USA, Russia and the British Empire. The core of Mittelafrika would be the Belgian Congo. If victorious the Germans would have split Belgium into vassal states and taken over its colonies. By also relieving Portugal which fought on the side of the Allies of Angola on the West coast Germany could connect its colony of South-West Africa (now Namibia) to the Congo which bordered German East Africa (now Tanzania) anyway and the German Cameroons. However, Portugal was also expected to give up Mozambique which bordered German East Africa to the South. The French would have lost Gabon to the South of the Cameroons and French Equiatorial Africa to its East. The British would have lost Northern Rhodesia (now Zambia) and Nyasaland (now Malawi) but retained Southern Rhodesia (now Zimbabwe) and Bechuanaland (now Botswana). Morocco had interested the Germans before the First World War and the British had resisted German attempts to control it in 1905 and 1911; the French had taken it as a colonial territory in 1912, so it is very likely that this would have been rectified in favour of the Germans in 1916. German Togoland between the British Gold Coast and Nigeria has expanded by taking the French strip to the East.

The Union of South Africa had only been created in 1910 after British victory over the Boer Republics eight years before. It is likely that the Kaiser Wihelm II who had been an outspoken supporter of the Boers would have forced the British to restore them, so you can see them as brown, i.e. non-colonial states bordering the German lands in the South. These would have been Transvaal, Orange Free State, New Republic, Stellaland and Goschen, though I imagine they would have formed some kind of confederation or even a federation. The other losses for the British would come in the North. In 1882 Britain had taken over running of Egypt and in 1889 had set up the Anglo-Egyptian Condominium of Sudan. At the outbreak of war in 1914 Egypt was made a British protectorate. Effectively these lands however, were supposed to belong to the steadily weakening Ottoman Empire, an ally of Germany's. So with Germany victorious these would be restored. Germany had been economically penetrating the Ottoman Empire before the war so would have had control of these areas including the vital Suez Canal link under control by proxy. I have assumed that with the war going against the Allies, Italy has remained neutral and kept its colonies.

Assuming a German victory in 1916, there is unlikely to have been any Second World War but this would not have exempted the German Empire from experiencing the pressures of nationalism that the British, French, Portuguese, Belgian, Dutch and Spanish empires were to do so in 1920s-1970s. By losing its colonies in our world in 1919, Germany was let off these challenges. In 1956, the first British African colony the Gold Coast (now Ghana) gained independence. Morocco and Tunisia had already left the French empire in the late 1940s. So it is likely that the German Mittelafrika despite all the German efforts to create an economic bloc, would have begun to fragment. How the Germans would have responded is a point of debate. Even the British and French who tried staged independence faced severe conflicts for example in Kenya in the 1950s and in Algeria in the 1960s. The Portuguese were still fighting bitter colonial wars in the mid-1970s. The German reputation for suppressing uprisings in its colonies was brutal. Suppression of unrest in German South-West Africa in 1907-11 led to the death of half of the indigenous population with thousands being forced into the desert to die. It is likely then that Mittelafrika would have seen decades of bloody conflicts and an Africa even more ravaged than it is in our world.

Walter Otto Henderson wrote 'Studies in German Colonial History' in 1962 and 'Genesis of the Common Market' in 1985, so seems a suitable author for this more detailed book.

Rooksmoor
Given how I have already encountered difficulties for expressing my views on political issues I think it is better that I remain to some degree anonymous.